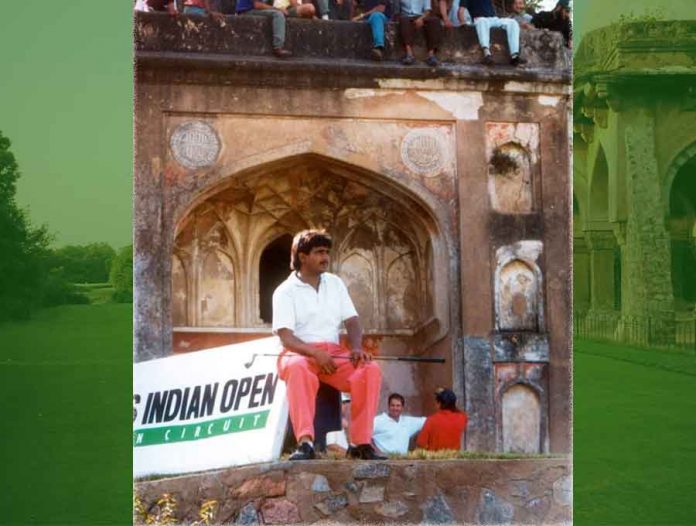 Apologies at the outset, this post should have been done middle of last month, for that’s when Ali Sher quietly observed the 30th anniversary of his historic Indian Open win. It was a first for an Indian pro, but the man is fine with the late realization.

With a wry smile he remarks, “Since you are here, lets relive the final moments.” We head to the 18th green of the Lodhi Course at the Delhi Golf Club. The layout has changed since the redesign in 2019, but the memories are intact at the venue “Ali Baba” has frequented since a child. At 61, roles have switched. He’s now spotted more at the driving range giving lessons than on the golf course, but the passion with which he talks about his playing days is infectious.

The years roll back as ‘Ali Baba’ reminisces the tee shot on the 18th.  Tied for the lead, the decision to pull out the driver was a brave one, but it worked as the ball landed centre of the fairway. From there, the approach shot was three feet from the edge of the green and ‘Ali Baba’ went for the kill. The ball stopped two feet short, which was tapped in for birdie and a one-shot win. He was to do a repeat in 1993, but 1991 stays special.

AlsoRead:- ‘Role model’ Atwal by the side, Kiradech exciting golf

Back from the scene that saw history being made, ‘Ali Baba’ takes a seat and orders a new shake on the summer menu that has caught his fancy. That mix of fruits is for me; for him its dip tea.

The prize money of $24,990 was a princely sum in those days, and life-changing in ‘Ali Baba’s case. Not once but twice. The family home in nearby Nizamuddin got rebuilt and the lives of near and dear ones changed as well. Tales of his generosity still resonate the club portals, but ‘Ali Baba’ brushes aside all such talk and attributes it to karma.

The biggest frill from the win in 1991 was the club granting him membership, for which he feels honoured till date. That said, the smaller joys are mentioned in the same breath. Soon after the win, ‘Ali Baba’ was lifted by supporters and carried on their shoulders to Nizamuddin. The beating of drums and chants of the crowd added to the occasion. Not much changed then and even after he won the second time in 1993. Bus Nos 401 and 410 of the Delhi Transport Corporation, headed towards the central part of the Capital, still dropped him to the club, just a stop away. A ticket cost 10 paise but was waived off by the conductor on the premise that “the boy had done a lot for the country”. Passengers too recognized the “boy who had won a golf tournament and was seen in TV interviews”.

Anecdotes like these and many more about the man who has inspired generations will stay, but for ‘Ali Baba’ none among these count among his favourites. There is one and only one that will stay long after he is gone. “Itihaas ke panno pe apna naam likh diya. (I have written my name on the pages of history,” and that sums up the life of a lion heart who chose to dream big despite heavy odds.