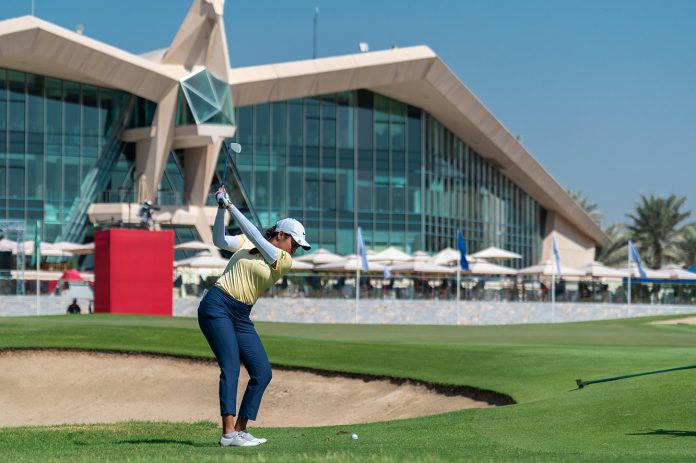 India’s Anika Varma was one of only two players in the field not to drop a shot in the first two rounds of the Women’s Amateur Asia-Pacific (WAAP), the region’s premier tournament.

At Abu Dhabi Golf Club’s National course, Varma shot a four-under-par 68, moving to seven-under par 137. She was three shots behind the leader, Thailand’s Natthakritta Vongtaveelap, who was also shot a bogey-free 68 to keep her two-shot lead intact at the halfway stage.

Japan’s Mizuki Hashimoto of Japan added a second straight 68 to move to eight-under-par, where she was joined in tied-second position by Australian Kelsey Bennett (67).

Eight Indian girls were in contention at the Abu Dhabi Golf Club’s National course – two of them nominated by host nation UAE.  Five of them made the cut, which was applied at two-over par 146.

Bengaluru’s 15-year-old Avani Prashanth added a second straight 71 to be tied 20th at two-under par. One shot behind and in tied 26th place were Purdue University star Sifat Sagoo (72), and Natalii Gupta (69), who is Dubai born and nominated for the tournament by the Emirates Golf Federation (EGF).

Jaipur’s Kriti Chowhan made it to the final two rounds in stunning fashion. Four-over after the first round, an early bogey on her first hole of the day (10th of the course), pushed her back to 5-over and way outside the cut line. She then proceeded to play the remaining 17 holes without dropping a shot and making three birdies.

The Sacramento, US-based 17-year-old Varma, who burst into the limelight with an incredible fifth place finish as a 15-year-old at the 2019 Hero Women’s Indian Open, started from where she left in her opening round, making a birdie on her first hole. She then added three more – on the par-5 eighth, the par-3 12th and the par-4 16th hole.

It’s been really good. I’ve been really consistent with my approach shots, and everything’s just been working out perfectly. I’ve been converting a lot of my putts, which is a good thing. I’m never going to complain about making birdies,” said Varma, who will be joining University of Oregon next year.

I think I will be three or four shots behind the leader. Honestly, I just play my game. It’s been going so well up until now, so I’ll just keep the same mindset and just have fun on the golf course. I really enjoy talking to my group and having fun and playing my game.”

Chowhan, who is representing India in an international tournament for the first time, said: “I am very happy with the way I played today. I was not hitting my irons that well in the practice, so I knew I will not play the first hole well, and that is exactly what happened. But I just composed myself after that, and I putted really well. My putter really saved the day for me.”

Vongtaveelap, known for her 300-yard average drives, was solid in making four birdies, which moved het to 10-under-par total, and she said:

“I was not as nervous as I was in the first round. The first round gave me more confidence and I played very good golf and hit some very good shots during the round,” said Vongtaveelap, who made birdies on the 15th and 18th holes after starting from the 10th, and then added two more on the second and third.

A total of 78 players from 16 APGC nations are taking part this week. WAAP is one of the most important events in the calendar for players from the Asia-Pacific region, with the champion golfer getting guaranteed securing entries in the AIG Women’s Open and The Amundi Evian Championship (both major championships), as well as an invitation to play in the Augusta National Women’s Amateur.