Home Across the Globe PGA Championship big star on my calendar: Morikawa 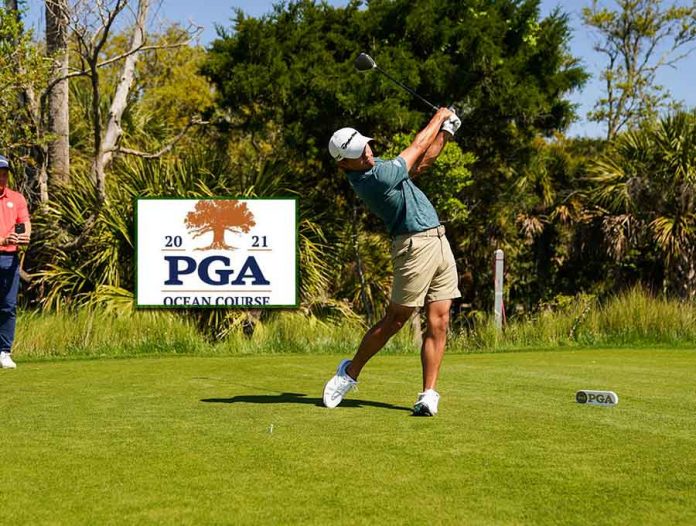 Collin Morikawa en route from The Augusta to South Carolina had a brief halt at the at Kiawah Island, where he will be back next month to defend the PGA Championship, his first for a major.

Making the best of the opportunity, the 24-year-old American played out 18 holes there. Collin Morikawa is excited. “Greens are pretty small, but man, talk about that back nine, starting from hole 9 and on, it’s a very good finishing stretch of golf, especially with the wind, the way it picked up. You’re going to be tested on every shot,” he said at the media session without mincing any words about the challenges the course is going throw for the Championship.

“(Today) I was hitting a bunch of 6-, 5-, 4-irons into greens, even had a couple 5-woods. Yeah, you really can’t get lazy on any of these shots. You can’t take anything for granted because it’ll bite you in the butt for sure.

“Usually we like bunkers. Usually you can get away with it, especially with greens that aren’t too sloped out here, but you don’t really know what kind of lies you’re going to get. So, we’re going to have to kind of readjust and figure out what the best strategy is out here to make some birdies.”

AlsoRead:- Steeled by pain, Amrit Lal on the right track

Question: Is it going to be any different coming here as defending champion than being PGA champion at any of those other places?

Collin Morikawa:  I hope not. I hope to come into the week – obviously where I sit in the world, people still look at me, and even though I’m young they know I can come out and win, so yeah, there’s going to be maybe billboards of me here and there, which I won’t be used to.

There are guys out here that have had way more experience on this golf course than I have.

I’m going to have memories of the 18 holes I just played, so it’s just like coming to a new course even though I’m the defending champion. It’s a brand new golf course. Thankfully I got to see it today and got kind of a head start on what it’s going to be like because I know it’s going to be tough now.

Question: More and more fans are coming to every PGA TOUR event and the majors. How excited are you to have fans out here for this PGA Championship?

Collin Morikawa:  It’s good to see a few people out here just enjoying the day, but they are like the life and they are the energy that they bring to this event.

I have missed them a lot. It was fun for about a month just kind of doing our own thing, not caring if you walk through the ropes or whatever. But it’s so enjoyable to see because they love the game.

Question: This stretch of golf has really been different than any others with so many majors packed together. How would you describe this stretch?

Question: What surprised you out here today?

Collin Morikawa:  Nothing surprised me because I didn’t really have any thoughts about what I was going to expect out here. But the wind, picked up the last hour and a half or two and those final few holes do not play easy. I’m sure they’re (greens) going to be a little firmer, a little faster. It’s not going to be easy to stop shots, whether it’s with a wedge or a 4-iron.

Question: What is the state of your game right now? Are you pleased where you are and how you’re peaking for what we get back here in about five weeks?

Collin Morikawa: The game feels really good. The game felt really good after the win at the WGC Workday at Concession. Still a few things I need to tweak here and there. But I’ve got a couple weeks.

The game at Augusta felt really good. (I) just made too many mistakes. Mistakes are going to happen, but I can’t be giving away shots like I did, but I learned a lot out there. We’re peaking at a good time, and we’re really looking forward to this kind of next few months of golf because there is a lot of good golf to be played.

Collin Morikawa finally leaves the course as a happy man – excited for the tournament on the “pretty good course” by his own description.