The soft hues of the blooming Sakura trees softened Rahil Gangjee’s quarantine period at the Joyx Golf Club this time. It was a departure from the similar phase in October last when Rahil arrived in Sayo, Hyogo, after lockdown to resume his campaign on the Japan Golf Tour that got halted abruptly following the Tour’s suspension in early 2020.

Apprehensive then, but not now as the claim is “I am past that stage”. The last couple of months of travel, inland and overseas, have taught Rahil Gangjee enough safety measures, paramount being staying away from crowds and crowded spots. The hint of concern that lingered on arrival at the Narita International Airport and through the eight-hour drive to Joyx GC got washed away when he was allotted Room No 301 again. “I can walk blindfolded and point out what lies where,” is the remark.

Nestled in the hills, serenity has had a role as well. “The beauty of Joyx calms you down and being on your own gives ample scope for introspection.” And of course, the room, “the size a luxury by Japanese standards”, all of this cushioned the abstention from golf. Even though he could not access the golf course this 14-day period, which ended early last week, the mind was making notes on what needs to be done. 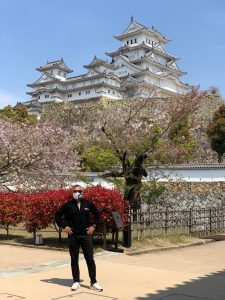 Unlike last year, when he was here for just three events, the stint this time will be longer. Of the eight events lined up for now, Rahil hopes to tee off in at least seven before heading home for a short break. The grind started on Sunday with another long drive to Nagoya for this week’s Token Homemate Cup. The couple of practice rounds at Joyx after regaining freedom did help but the conditions at the Token Tado Country Club will be different.

Primary will be the green speed. Compared to 8-9 in Joyx, Rahil expects lightning-fast surfaces in Nagoya with speeds touching 13. Atop the list on arrival is hitting the putting area and practicing long putts. Caught napping last year, Rahil has learnt from experience. Some distance from securing his card for next season, Rahil’s plan is to do so by June, and for that sharp play on the greens will be critical.

Also, there is hope the work on the golf swing with coach Ajai Gupta in Delhi last month will bear fruit. The feel is better and could be a good omen. Should he win this week or the next, there can be no better way of observing the third anniversary of his momentous rise at the Panasonic Open in 2018.