Contrary to the thumb rule of staying in the zone, Digvijay Singh was sailing in two boats the week of the 2012 Panasonic Open in April. In fact, shooting took a precedence over golf as he was more inclined to secure the MQS (minimum qualification score) in the National Championships. That would have placed him in the category of a “renowned shooter” and enable him to import a weapon of his choice and compete better in his pet event, 300m big bore. 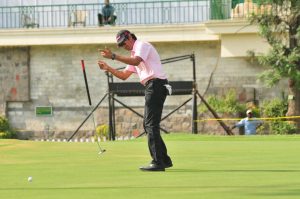 Monday and Tuesday went past like a blur as he hurried through 9 holes of practice at the Delhi Golf Club (DGC) before rushing to the Kadarpur range in Gurgaon for preparation. Turning out for the pro-am on Wednesday was ruled out as that was the day of competition. Needing 475 out of 600 for MQS, Digvijay faltered badly and needed 38 points off the last five to get to the magical figure.

AlsoRead:- Patience the keyword for red-hot Im at The Masters

“I got ahead of myself and paid the price,” says Digvijay. After the 56th shot was way off target, he was resigned to fate. “The castles I built in the air came crashing down.” With nothing to lose, he went ahead with a carefree mind. He scored 10x (better than bullseye) off the next two shots and then a 9 each to scrape through. “For me, it was like striking gold at the Nationals, and such was the level of ecstasy that I went back to DGC to hit balls.” 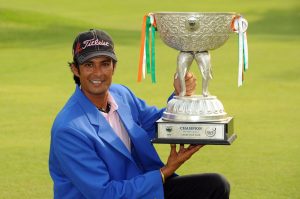 The high was enough to see Digvijay through to Sunday and his maiden Asian Tour win. The final round, especially, had a different feel as he shot 66 after a late flurry of birdies. With a one-shot lead, Digvijay had a 15-foot putt for birdie on the 18th. He read the line well, but the ball was yet to go in when the celebration started. “I let go of the putter and started to walk towards my caddy as I knew I had won.”

ReadMore:- Lahiri gets into The Player main draw as Koepka pulls out