Home Across the Globe This Masters week, grandson relives the aura around Bobby Jones Jr 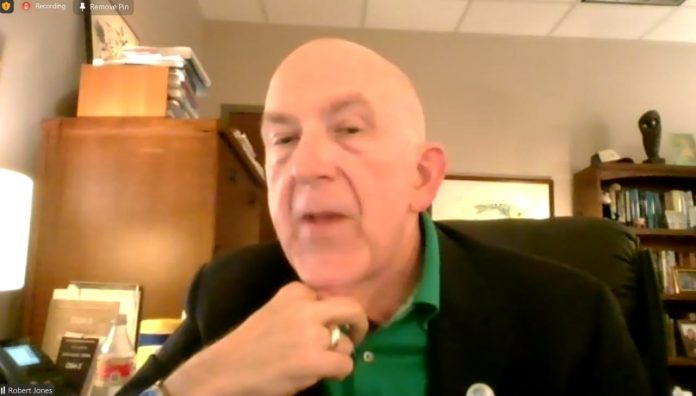 According to golf writer O.B. Keller, Robert “Bobby” Tyre Jones Jr, the founder of Augusta National Golf Club, had the “face of an angel and the temper of a timber wolf”. It was displeasure that led Jones to pick up his ball after several failed attempts from the famous hill bunker on the par-3 11th at St Andrews in 1921 during the Open Championship.

He eventually learned to control his temperament to become the owner of 13 Major championships. Jones retired from the game at a relatively young age of 28 to take care of his law practice, never having turned professional.

In the 50 years since his death, much has been documented about the 1930 Grand Slam winner’s life and times. The stories gain steady traction across the golf world slowly around Christmas each year in early anticipation for the first Major of the year. Come April these whispers turn into revered roars. This year is an unusual one – a second Masters tournament in five months.

An audience of 100+ folks spread out across the US attended a talk where Lewis was in conversation with Dr. Jones IV. In a session peppered with anecdotes, he spoke about growing up around his grandfather, a hero for many in the golfing world.

By profession, Jones IV is a priest and a clinical sport psychologist. His grandfather wrote about the psychology of playing sport at the highest level.

The grandson tries to put in words the feeling of the rollercoaster of competition faced by his grandfather. After initial hiccups in Major championship golf, Jones learned to relax his muscles, control his breathing, and chain-smoke cigarettes on his way to victory.

Born on St Patrick’s Day, on the 17th of March in 1902, Bobby Jones was a golfing prodigy and a rebellious spirit in the words of Jones IV. “My great grandmother was extremely protective of him. He grew up in a tight-knit family. The talent was recognizable early on, but you would have had to be careful of how to handle him in his youth.”

Between 1923-1930, Jones won 60% of the tournaments he played in. It was a bit like the Tiger Woods frenzy of today. Any comparisons are unjust to either era or player. Here was a man in a period of unreal dominance, but one who did not forget humility or humour.

Jones IV takes us through a story about the 1929 US Open. Held at Winged Foot, Jones took a three-shot lead into the final round. Over the last four holes, this lead evaporated with a triple bogey and bogey.

Al Espinosa the clubhouse leader watched this unfold. An 18-hole playoff was to follow between Espinosa and Jones the next day to determine the winner of the National Championship.

The playoff was supposed to start at 8 am. Jones knew that Espinosa was Catholic and went to pray at the same time. He, therefore, persuaded the United States Golf Association (USGA) to postpone the playoff to an hour later.

The Jones and Espinosa families prayed together in a church that day, even sharing the same pew. “It turned out that it was the only prayer that Espinosa had all day, as Jones beat him by 23 strokes to win his third US Open” adds Jones IV.

Over time, his grandfather realized the subtle difference between golf and tournament golf. The two, as we now know, have nothing in common. How many of us can control our minds? Jones was a big believer in providential experiences.

In Jones’s mind, the result was pre-destined before a shot was hit. Explaining this, Jones IV says “this spiritual belief was highly psychological, and helped distance my grandfather from the pressure of competition”.

1930 was a watershed year in golf history, as Jones won all four legs of the Grand Slam. In order, The Amateur Championship (St Andrews, May), The Open Championship (Hoylake, June), The US Open (Interlachen, July), and the US Amateur (Merion, September) gives him the rights to the only calendar Grand Slam (pre-Masters) in the history of the game.

There is some interesting background to the Slam Year. As far back as 1925, Jones was thinking of quitting competitive golf. After winning both the Open Championship and US Open the following year, he thought about trying to win all four in the same year. He began planning. Which courses would suit him? Which years were appropriate? He would have to rely on the USGA to pay for his passage across the Atlantic and so on.

Jones was careful with whom he shared his goals. His wife Mary knew. O.B. Keller was in the knowhow. By September of 1930, there was no hiding. He was world-famous after his win at Merion, even without the media fishbowl of today.

Coming to the conversation of Masters Week, Jones IV reflects on the building of Augusta National. Despite the hardships of the Great Depression in the 1930s, construction of the club and course continued.

“Architect Alister MacKenzie and Keller would follow Jones as he played at St Andrews. After the round, the three would have long discussions on different aspects of the Old Course. Some of these thoughts translated into reality at Augusta, and still exist today as remnants of the old design.” 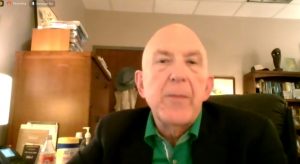 Jones IV also touches on the relation between his father and Augusta National co-founder Clifford Roberts, a New York-based investment banker. “There was a certain amount of tension between the two men. This ultimately made the Masters the tournament that it is today. Of course, it also came with a price.”

Jones IV recalls missing the Masters for about a decade up until 1990. During these years he also lived away from Atlanta. In 1990, he moved back and was having lunch with his grandfather’s former law partner “Buster” Bird.

Bird told him that he had an obligation to fulfill – to carry on the Jones name and legacy into the 21st century.

In 1950, Bobby Jones was diagnosed with Syringomyelia, a then relatively unknown neurological disease. The ailment left him paralyzed and unable to play golf. His health gradually deteriorated until his demise in 1971.

To honor his name, the Jones family partnered with Chiari & Syringomyelia Foundation (CSF) to help people affected by the ailment. Named after the golfer, the foundation funds research into Chiari and Syringomyelia in the United States. They are also involved in patient advocacy, helping educated families about medication.

Dr. Bob Jones IV is on the board of directors of the Bobby Jones CSF.
They also host the Bobby Jones Classic at East Lake Golf Club and Winged Foot Golf Club each year – both familiar hunting grounds for the Jones name. The events help raise awareness and charity for the foundation. The proceeds go back into research funding and patient care.

Who then was Robert Trent Jones Jr.? The answer could be any of the things that he amassed in his lifetime on and off the course. Or the rejoinder is that he continues to play a large part in bringing the golf world together. For the many Grand Zoom participants that evening, this was true.

Find out more about the Bobby Jones CSF here.
The Society of Golf Historians has a podcast that can be accessed here.