The putts have started to roll in more frequently ever since Tvesa Malik broke a title drought on the Women’s Golf Association of India (WGAI) in March. The two-shot win in Leg 6 at Jaipur’s Rambagh Golf Club was her first since 2019, and the relief was palpable.

With the WGAI going into a break after that event, the focus was bound shift to the Ladies European Tour (LET) where Tvesa has picked up some memories of late. In September, the 25-year-old recorded her first top-10 on foreign soil at the Ladies Open de France. That was 2020, the pandemic was raging and sport like other aspects of life was struggling to get used to the new normal.

Nothing much has changed since then. The second wave is perhaps just past its peak, and sport is yet to regain its robustness. Amid the restrictions of staying and performing in a bio-bubble, the task of an athlete has become even more difficult, with the well-being of family and loved ones at home constantly playing on the mind. 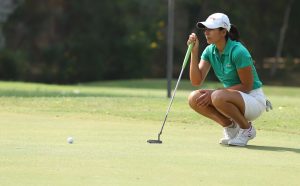 Amid all this, Tvesa scaled a peak in the new season by posting another top-10 on the LET, this time at the Ladies Italian Open. Sunday’s finish completed a treble as Tvesa had recorded her maiden top-10 at the 2019 Hero Women’s Indian Open at the DLF Golf and Country Club.

After finishing 23rd at last week’s SA Women’s Open, this one was a rollercoaster ride for Tvesa as she began poorly with a 74, bounced back on Saturday with a solid 66 and even looked like mounting a strong challenge on the final day. Tied for the lead in the intial stages with early birdies, Tvesa closed with a 73 to finish at three-under 213.

Making a return to the LET after a trying phase was Diksha Dagar, and the 2019 SA Women’s Open champion would count making cut and the T43 finish a positive after acute back pain kept her out of action for almost two months early on.

Hughes, Henley, Oosthuizen, who will be the last man standing?

Stats not livelihood Shamim’s worry, but all’s not lost

On familiar turf, Wolff hopes to go one better at US Open

Hughes, Henley, Oosthuizen, who will be the last man standing?

Stats not livelihood Shamim’s worry, but all’s not lost

On familiar turf, Wolff hopes to go one better at US...