Search
Home Across the Globe With Tiger off the greens, someone is following on his footsteps 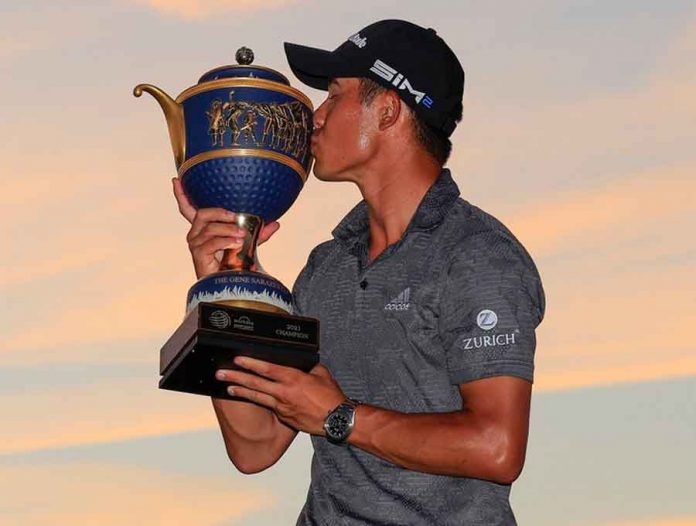 Tiger Woods is off the greens with a career threatening injury. Amidst prevailing uncertainty that when the legend will return to rule courses, there is someone who is following on Tiger’s footsteps.

The 24-year-old Collin Morikawa, who idolized Woods as a child, has become only the second golfer ever to complete the rare double of a Major and the World Championship crowns before the age of 25. Woods was the first to accomplish the feat, which Morikawa emulated by winning the WGC-Workday Championship at The Concession on Monday.

Morikawa’s feat of 22 consecutive cuts in the beginning of his professional career is also second only to Woods, whose streak ran up to 25 uninterrupted cuts.

Morikawa had won the Barracuda Championship last year as his first Major PGA Tour title. On Monday, he defied a spirited late charge from Viktor Hovland to claim the WGC-Workday Championship at The Concession with an exciting three-shot win.

Even though Morikawa was not among the host of golfers who turned in Red and Black as a token of respect to the injured icon, he was quick to remember his hero after accomplishing the feat at The Concession.

“Tiger means everything to me,” Morikawa said. “He’s had that crash and thankfully he’s alright and hopefully he’ll have a quick recovery. But I don’t think we say thank you enough, so I’d like to say thank you to Tiger.”

Morikawa has been a steady performer on the circuit, winning five titles between 2015 and 2019 as a collegiate golfer. His other achievements as a rising golfer include Western Junior, Trans-Mississippi Amateur, Sunnehanna Amateur and the Northeast Amateur crowns.

He had also been part of the triumphant Arnold Palmer Cup teams in 2017 and 2018, Walker Cup champion team in 2017 and the Eisenhower Trophy team which ended up second in 2018 by a mere one stroke.

A graduate with a degree in business administration, Morikawa also spent three weeks as the No. 1 player in the World Amateur Golf Ranking before he turned pro in 2019.

Besides a Major and the World Golf Championship crowns, Morikawa also has under his belt two PGA Tour titles.

Albertse high on confidence and good in the wind

Albertse high on confidence and good in the wind

Matsuyama holds on to lead, but gives himself 1/10

Golf a vehicle to better life for Sukantan Mondal

New mindset and setup, Khalin Joshi thriving as a ‘rookie’

Driver’s on song and so is Abhijit Chadha