Honey Baisoya’s six titles on the Professional Golf Tour of India are testimony to his vow to never give up till it is over. The motto has paid off on most occasions, and couple it with his aggressive style that he imbibed in the formative years, he has a heady combination working for him.

The cheque of Rs 6 lakh remains his biggest winner’s cheque till date, but for the 24-year-old, the 2016 Chief Minister’s Meghalaya Open was all about a breakthrough he had not prepared for.

“I won my first tournament in Shillong and it is special because I did not even want to go there as I missed cut when I went there the first time. I told myself that I will not go to Shillong or Digboi if I had a win before these tournaments. I played a few tournaments before and I did not play well so I did not have an option but to go there. 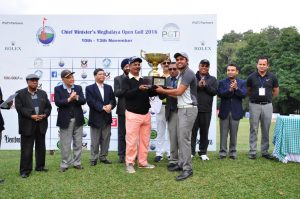 “On the first day, I played 1-over and the target was to make cut as I was not confident on that course. But thanks to Hole No 10, a par 5, I played 7-under on that hole that week and finished the tournament at 9-under to win by two shots,” said Honey.