Given his outlook towards life and golf, which involves going deep into matters of critical importance, Manu Gandas believes nothing happens without a reason. Taking to judo early on after watching elder sisters, Sakshi and Ritu, go right up to the national level can now be put into perspective.

“Judo taught me to concentrate, manage time better and uppermost was patience,” says Manu. Taking after the sisters, Manu too gained some proficiency in the Japanese martial art but given its explosive nature he gave it up once the course was chalked. Golf it was, but the lessons learnt on the judo mat have stayed.

The transition from the amateur to pro ranks is never easy, and Manu too went through the pangs but did not flinch. “The results did not come the first couple of seasons. Though disappointing, the lean run did not affect me mentally,” he says.

He was confident that his time would come, and why not. Another key decision taken at 12 had brought him thus far, and would surely get him into a space where he could turn back and say, ‘patience pays off’.

The Indian pro circuit was set rocking in the early part of 2008 with the Emaar MGF Indian Masters and Johnnie Walker Classic happening in quick succession. Manu played a baby part as a volunteer but those two weeks of walking the Delhi Golf Club and DLF Golf and Country Club and interacting with some of world’s best golfers “helped decide this is what I want to do”. 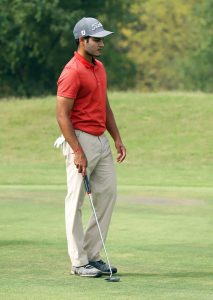 If learning judo and the lessons imbibed those two weeks have helped chart his course, a couple of more lay in wait. Analyzing the initial lean run after turning pro in 2015 revealed that iron play was letting him down. Helping Manu in this exercise was long-time coach Anitya Chand, who has been on board since Manu first wielded a golf club during a summer camp at the DLF Academy in 2003.

With time the bond has got stronger, and so has Manu’s craft under Anitya’s watchful eyes. The area of concern addressed; the past two seasons have been rich with a surge in top-10s. The crowning glory came just two months back with his best finish, sole second, on the PGTI and the biggest career cheque.

But here too, a lesson lay in store and Manu has come out wiser after those “silly dropped shots” on the final day of the Glade One Masters in Ahmedabad. Never before had he gone into the final day with a share of the lead, and in the bid to surge ahead aggression sneaked in, and hence those errors.

Like the previous life lessons, Manu is confident the effects of this latest learning will show up in due course, but for that he has to keep striving to get better.

More Read:- Passion rules as no hurdle too high for Mumbai’s slum golfers