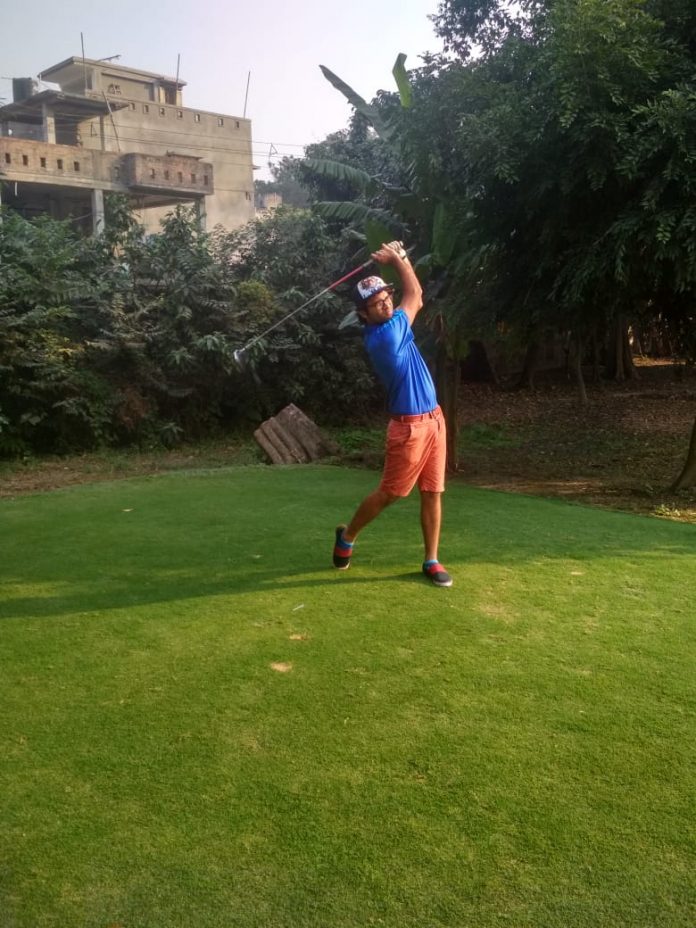 I have a box of golf balls in my cupboard at home. A fancy brand, nice and sealed. There is always the temptation to play with these golf balls, but for reasons sentimental I resist. This box is the only reminder I have of teeing it up in a professional golf tournament as an amateur.

The one time I got to mix it up with the big boys on the Professional Golf Tour of India (PGTI). It is another thing that I missed the weekend cut and finished dead last in the field. This is the story of the highs and lows of a week in March 2019. A week that I have no pictures of, only a scorecard and a box of golf balls.

I was never going to become a competitive golfer beyond weekend monthly medals at The Tollygunge Club in Kolkata. Yet, like anyone reading this piece I too could dream of lining up a putt to win a Major on the practice green. Later as a golf journalist, I had the privilege that most fans didn’t – unfettered access between the ropes.

I grew up primarily swimming and running in school. My mother is a former ranked amateur from the 1980s. Her claim to fame was winning the Bangladesh Amateur around the same time, beating a field of Asian ladies at the Kurmitola Golf Club. A couple of decades later, I discovered her dusty clubs lying around at our house.

As a teenager, I was more interested in watching cricket, and occasionally F1 races. Golf was too “slow”, it had too many rules and regulations. Nevertheless, by the time I graduated high school I was hooked. Watching Tiger Woods win the US Open in 2008 was a turning point. As everyone knows, it was an 18-hole playoff between Tiger and Rocco Mediate which the former won after a mammoth 91 holes.

When I look back now, it isn’t difficult to see what drew me towards journalism and narratives. It was sport at its finest. David vs Goliath, except that David had a legit chance. One realizes that golf gives the little person an opportunity like no other sport. Finesse over brute strength on display even today in 2021 at the highest level of the game.

In the ensuring years during undergraduate studies, my handicap dropped but like I said nothing spectacular. Low single digits was nice, but not enough to qualify for tournaments like the East India in Jamshedpur. I didn’t even make my school golf team. It was clear that I had a better chance as a writer!

In March 2019, PGTI came to Kolkata, making a return to Tolly after a long while. Each club is allowed a few “spots” for promising, upcoming players. Now I had never considered myself to be part of that definition. In the past, I could have shot the odd 70, but nothing spectacular. I was of course, still prone to those blow-up rounds that leave you shaking your head for days after.

An unlikely sequence of events led to the club office calling me and asking me if I would like to tee it up at the pro event. Two golfers before me had declined, and as third alternative would I be interested in playing the event? I made sure to cross check – this was the pro tournament and not the pro-am right?

For the ordinary weekend golfer, this was a once in a lifetime chance. Being high enough on the club gross leader board, and the good fortune of the folks before me dropping out was a boon. The day before it started, there was a pre-tournament presser. When Rahil Gangjee and Viraj Madappa walked in to speak as home favourites, the magnitude of the situation hit me. A professional golf tournament!

Golfing with the pros

Gangjee was kind enough to play a nine-hole practice round with me that day. In early 2019, he was coming off a two-win season. To watch him hit the ball from close quarters is always a treat. It was like a well-oiled Rolls Royce chugging along the racetrack. A few tips from the bunker, and a word about temperament he left me to play the back nine on my own. With darkness approaching, my caddy and I kept searching for my swing trying to bring a measure of respectability to the action.

Before we called it a day, I was in for a surprise. All participants would get some gloves, balls, and a hat from the tour sponsor. Through the two days we used up most of one box of balls. The other box, as you now know – lies at home.

The first two rounds I was drawn with Sachin Chouhan and Rishi Kumar both from North India. We were the first group off at 7 am from the front 9. A few hours earlier, I was on the range warming up watching the sun rise. It was a stark reminder that behind the glamour that is professional golf, a lot of it is loneliness and hard work.

I recall hitting the first fairway, bogeying the opening par-4 and nearly making an ace on the 2nd par three. The rest of the round was a blur. I remember coming to the last three holes thinking I may shoot 75 or 76. Complacency and a few bad shots later, it was a 79. Still, it could have been worse.

Day Two was an afternoon time, and I hoped it would be more relaxed. I was dead wrong. A combination of all the emotion, and the heat which was nearly touching 40 degrees did not help as I started the back nine (our first nine) a combined six over par. My friends Surya and Aditya decided to stop following us at this point.

At the point, I was literally shaking. Perhaps a laughing matter for some, but I had to put myself together. I thought of my mom. I thought of Rahil’s dad, Bashir uncle, who I grew up playing the course with. I thought of my first coach, Hyder Khan, at the Royal Calcutta Golf Club who would tell me stories of meeting Peter Thompson between lessons.

I told myself, no matter what the result I had to play for them. That afternoon I took a deep breathe walking onto the 13th tee. The next 8 holes was again a blur. I somehow played them in even par. The remaining 7 holes saw a double, and triple littered with bogeys and pars. 15-over par 85. One moment you’re the bat, the next moment – the ball being whacked (probably out of bounds!)

A cumulative 24 over par for two days. Now I really know what the pros felt like at the end of a draining 48 hours, missing the cut and “trunk slamming” for the weekend. If nothing else, it made me appreciate the struggle a lot more. The experience opened my eyes, complimenting years of watching the trials and tribulations of the game.

If I saw a professional golfer blow up a round, I could relate a lot more to the experience, and more importantly be justified in my reporting as a writer. It also tells you that the scorecard always belies the experience. It is a lot more than simply learning to hit the ball straight and making putts.

Sometimes I think of that weekend where eight (at last count) Asian Tour winners (amongst numerous PGTI and other international tour winners) teed it up at The Tollygunge Club. It’s nice to tell folks that I did too. Only thing is, I don’t have any pictures of that week. Just a scorecard and a box of golf balls.

More Read:- From the gates of IIT to reading the greens, what a turnaround Akshay Neranjen