Not just the pandemic, 2020 had other firsts for Harshjeet Singh Sethie. The 19-year-old made the ‘Great Leap Forward’ by turning pro at the start of the year but was in two minds about switching ranks given his status on the Professional Golf Tour of India.

Lockdown allowed time to reflect and the outcome was he needed to let go. “Life centred around the sport and three months away from the golf course helped,” says Harsh. But that didn’t mean getting indifferent. Regular workouts and online lessons with coach Amandeep Johl ensured “I kept working towards golf”.

An entry in the Players Championship at Panchkula after restart in November last, and the switch was complete. Harsh was a full-fledged pro with some prodding from father Ajit Singh Sethi. As expected, the initiation wasn’t easy with hitting that week and the next in Chandigarh a major concern. 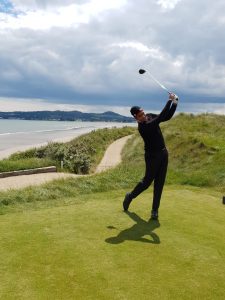 The Jeev Milkha Invitational presented by TAKE Sport was round the corner, and student-coach got down to setting it right at the Delhi Golf Club where Harsh grew up. Harsh got some respite and with the putter hot, he was two off the lead after Round 2 and four behind going into Sunday.

A possible shot at the title and paired with Udayan Mane and Chikkarangappa S, Harsh was faced with some of the biggest moments of his fledgling career. But he chose not to dwell on this.

“I was trying not to think about it as that would have made me anxious.” He took it one shot at a time.

Also Read: Stumbling and learning, no stopping Shabeg Singh Kooner from getting better

The tactic paid off as the final day under-par round and the resultant sole seventh carried many a lesson.

More important was the belief that he belonged to the big stage, and that was to find expression again in the top-11 finish at the Glade One Masters this February, on a golf course that was a test of skill and strategy.