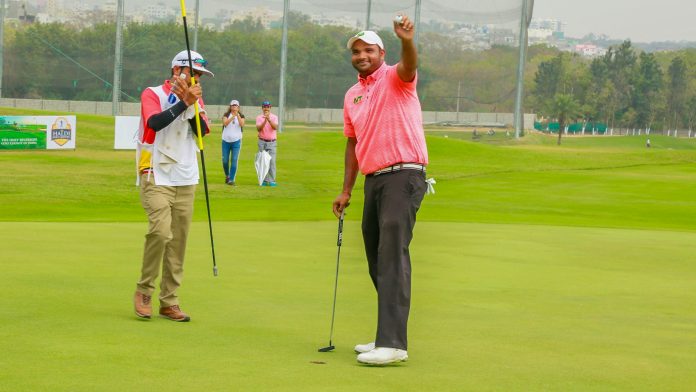 When Udayan Mane lined up his final putt for the win on the 18th at Golden Greens Golf and Country Club during the recently concluded Delhi-NCR Open Golf Championship 2021, he thought of his maternal grandfather.

Justice PB Sawant recently passed away in February 2021. A Supreme Court judge who was part of the Press Council of India, he would often follow Mane on the golf course.

Justice Sawant was also an avid reader, and made sure to pass his wisdom to his grandson whenever they spoke. Theirs is a tight knit family, and no matter where in the world, everyone is always in touch.

A wave of emotions hit the 30-year-old. It was his 11th win on the Indian Tour, and fifth dating back to February 2019. Professional sport is a bit like an onion. The unraveling of different layers tells you the story.

Back to Golden Greens after nearly a decade

Mane arrived at Golden Greens having played six events since the restart of the Indian tour. His best finish was 3rd at Panchkula Golf Club amongst other top-15 finishes, and one missed cut. He was regularly putting himself in the mix, but was searching for winning form, something he is all too familiar with.

In March 2020, at the last event before the lockdown, he was denied a fourth consecutive victory when Aadil Bedi chipped in on the 6th playoff hole at the Tollygunge Club.

This was the first time he was playing at Golden Greens in nearly a decade. Memories from his amateur days ensured that he was fairly well versed with the layout.

Speaking on the phone from Pune, he says “After the season restarted in November last year, my head wasn’t in the right space. I wasn’t mentally a hundred percent. At Golden, I decided to take each day as it comes and hit a lot of irons off the tee.”

The approach translated into scores of (71, 67, 67, 69) for a four-day total of 274, enough for a two-shot victory over the trio of Aman Raj, Chikkarangappa, and Shivendra Singh Sisiodia.

Sometime during the lockdown earlier in 2020, he was asked whom he wanted to spend his time in isolation with. The answer was unanimously close friend Anirban Lahiri. Mane got his wish when he spent time in training with Coach Vijay Divecha in July of 2020 at Kalhaar Blues and Greens Golf Club in Ahmedabad.

Joining him from the US was Lahiri, who also works with Divecha. It was two months of matches and discussions with the PGA Tour based Lahiri.

A boatload of pressure fell off his shoulders with the win at Golden. Mane says “Winning and losing are both equally tough on you. It helped for me to take a step back, move around the chess pieces and chart plans.”

As part of these plans, he also visited a performance fitting centre in Bangalore to recalibrate his clubs. Professional golf is usually full of its own camps. Sections of players, coaches, and trainers will hang out together.

In this case though, Japanese tour regular Rahil Gangjee was with Mane at the centre. He says “There was an exchange of ideas, as Rahil was kind enough to point out things in my swing. We were on similar grounds with these swing thoughts and positions. It was cool to have him around to learn from his experience.”

Replicating form in professional sport is tough. Even more so in Mane’s case – he’s used to hanging around late in the final round vying for a win. Overcoming his personal battles through an uncertain period helped him reaffirm his sense of belonging. His reputation is such, that there are always expectations every time he tees it up.

With the victory comes the added incentive of moving into the top of the Indian world golf rankings. With the Olympics around the corner, the timing couldn’t be more perfect.

Apart from the competition breathing down his neck for that spot in Tokyo, there are other worries. Rising cases across the country threaten a second wave, and possible lockdowns. The Asian Tour is yet to restart, with most players in the east currently confined to local tours. Those are concerns only time will answer. For now, Mane is content with finding another mental gear.

More Read:- No better time for Rahil to renew love affair with Japan