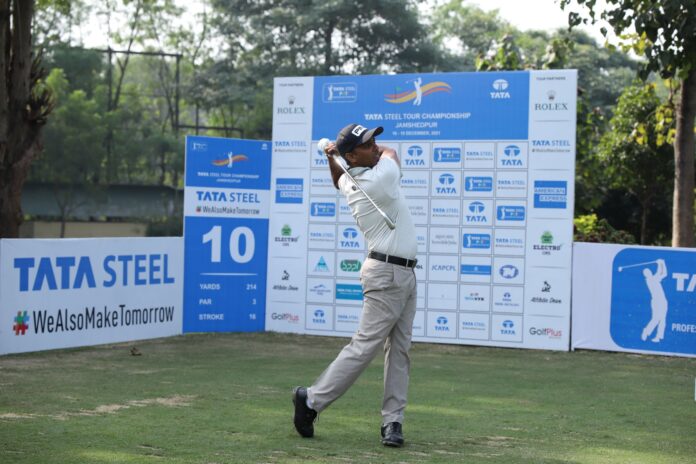 The pre-tournament favourites and international names made their presence felt on the opening day of the Rs. 1.5 crore TATA Steel Tour Championship SSP Chawrasia fired a terrific nine-under 63 for the lead while Shubhankar Sharma and defending champion Gaganjeet Bhullar were tied for second at five-under 67.

Related Content: Low round and out-of-syllabus question for SSP

SSP pulled off an early birdie on the second hole despite his stance being in the bunker on his approach shot. That set the tone for four-time European Tour winner Chawrasia’s round as eight more birdies followed. SSP, a three-time winner in Jamshedpur, landed his wedges extremely close on the fourth, eighth and 15th and sank it from 10 to 15 feet on the ninth, 14th and 18th to cap an almost perfect day across both the venues for an imposing four-shot lead.

SSP, who had shot an 11-under 61 at Beldih in Round Two of the tournament last year, said, “I’ve been playing in Jamshedpur since the inaugural event here about two decades back so I’m always at ease at these two venues because I know both the courses pretty well. I know exactly where to land the ball. I’ve also won three times playing on these two courses so that also helps.

“Importantly, I was quite focused through the day, so the break after the front-nine and the travel between the courses didn’t really affect me too much. I hit it within 10 feet on most occasions to set up birdies. Making birdie on the ninth was also crucial as it helped carry forward the positive vibes to the second venue for the back-nine.”

The duo of two-time European Tour winner Shubhankar and nine-time Asian Tour winner Bhullar made seven birdies and two bogeys each on day one for impressive starts to the week.

He said, “After a slow start, I found my putting touch in Beldih. I also made some crucial conversions towards the end of my round. It was a satisfying day as I was quite patient on the greens. I was happy to end the day with a long birdie putt on the 18th.

“It’s not easy to make putts as you got to change and adapt to the speed of the greens especially in Beldih. You have to switch on at the start and then switch on again with the change of course and then rediscover your touch on the greens. Hopefully I can do that again the next three days.”

Bhullar was excellent with his wedges as he set up three tap-in birdies. Like Shubhankar, Bhullar too closed the day with a 15-feet birdie conversion on the 18th.

Gaganjeet said, “I putted quite well today. I gave myself a lot of birdie opportunities and converted most of those chances. Except for a few erratic holes, I was quite consistent and composed through the day.

“I picked up momentum on the last few holes hitting my wedges quite close. The three back-to-back birdies on the back-nine were the highlight of the round. I left myself putts within five feet on all those holes.”

PGTI Order of Merit leader Karandeep Kochhar of Chandigarh was in tied 28th at a score of 71 along with Jyoti Randhawa and Jamshedpur-based Karan Taunk.

Chikkarangappa, currently second in the PGTI Order of Merit, shot a 72 to be tied 37th.

Kurush Heerjee, the second player from Jamshedpur in this field, carded a 74 to be tied 52nd.

Read More:- Our first dispatch on Tour Championship from the Steel City