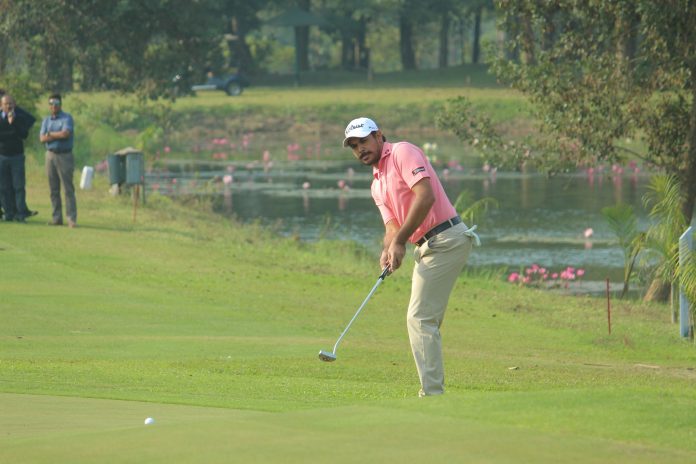 Gaganjeet Bhullar goes into the final day of the Commercial Bank Qatar Masters two shots off the lead. Should he win on Sunday, the title will be his second on the European Tour after the triumph in Fiji in August 2018.

We replay an interview after the strapping golfer from Kapurthala ended 2020 on a high note with a win on the Professional Golf Tour of India.

Bhullar laughed when asked if he was the favourite going into the final day of the Tata Steel Tour Championship. The conversation centred around his knack of emerging unscathed out of pressure cooker situations quite often, and while Gaganjeet put it to “following the process and routine”, there was a veiled warning. “Whenever in contention, I’ve gone on to win.”

Also Read:- Revisiting a piece of history with Ali Sher

Of course, he has. Among the nine titles across Asian Tour and European Tour and one @challengetour, quite a few of them have come in this fashion. In Jamshedpur, Gaganjeet showed how it’s done again as he bounced back once each on the front and back nine to add one more to his 9 titles at PGTI.

We could attribute his display on Sunday to the fickle nature of sport or how the golfing gods rallied behind him. A more plausible way of analyzing the outcome is the way Gaganjeet learnt his golf in Kapurthala. “I started playing tournaments very early and initially I struggled as the greens at RCF Kapurthala were slow. I was always an excellent ball striker but what played on the mind while competing against the big city boys was how I could improve my short game. I worked hard on my putting stats and by 14-15 got mentally strong and graduated from a good player to a very good player. I would have been a better junior golfer had I lived in a big city but that also kept the fire burning to get better.”
Those efforts have borne fruit and how; a 14-year pro career full of summits.