Home Indian Golf Sisters, Jahanvi and Hitaashee, to battle for honours in 5th leg of Hero... 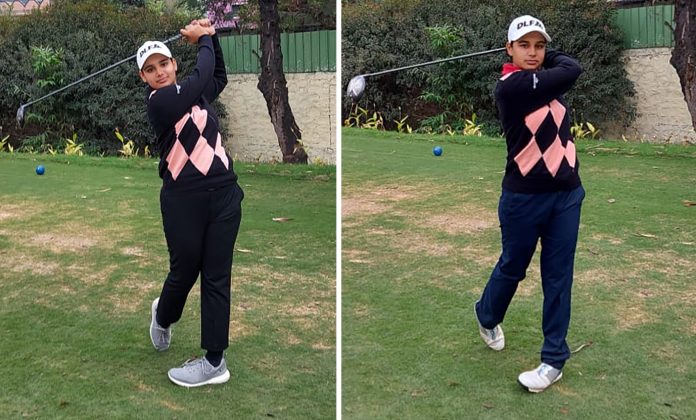 Gurugram, March 11: Jahanvi Bakshi’s comfort with the DLF Golf & Country Club continued to grow as she carded the day’s only under par round in the second round of the fifth leg of the Hero Women’s Pro Golf Tour. Jahanvi, who is still searching for her maiden win on the Tour, shot 3-under 69 to follow up on her first round 71 for 4-under 140 total and open up a handy four-shot lead over younger sister Hitaashee (71-73) with one round to go.

It is the first time a pair of sisters are occupying the first two spots in a Hero WPGT event. Some of the other sisters playing on the Tour include Atwals, Mehar and Seher, and Badwals, Gursimar and Gurjot.

As the battle for the honours moved towards becoming a clash between Bakshi sisters, Vani Kapoor shot 73 after a first round 74 to lie at third and was three shots behind Hitaashee.

Tvesa Malik, who began well with 71 on the first day slipped to 77 that included a triple on Par-5 eighth and a double on Par-4 ninth. She lies fourth with amateur Avani Prashanth (72-76).

Jahanvi, whose final round at the same course in the eighth leg of the Hero WPGT 2020 was a 69, was shooting her third straight sub-par round at the Gary Player layout. In the first round this week, she was five-under through 12 holes before a triple on 13th and a bogey on 15th set her back and she finished at one-under 71.

In the second round, Jahanvi picked birdies on Par-5 fourth, Par-3 fifth and Par-4 ninth to turn in 3-under. A birdie on Par-5 15th made amends for the bogey a day earlier and made it 4-under, but she dropped a shot on Par-4 17th and closed with a par for 69.

Jahanvi said, “The last time I played here in the 8th leg I shot 3-under 69 so I knew it was possible. I tried to stay clear of the errors of yesterday. Last year was a rookie season for both of and Hitaashee won leg nine, so she inspired me. She is the youngest, so if she could I knew I could also win.”

They often play together in practice but this time it is for a professional title.

Hitaashee, though younger, broke through on the pro ranks with a win late in 2020. In the second round, Hitaashee, who started in T-2nd place, had just one birdie on Par-5 15th, but dropped shots on Par-5 fourth and Par-4 17th.

Also Read:- With a prayer on lips, Pawan Kumar lives in hope

Amateur Avani Prashanth battled hard despite a rough patch, when she dropped bogey-double bogey-double bogey between third and fifth. She made some amends with four birdies overall in her card of 76. With her first round 72, she is 4-over 148 and tied-fourth with experienced Tvesa Malik (71-77).

Overnight leader Saaniya Sharma slipped from 70 on day one to 89 on the second for a 19-shot swing and dropped to T-16.

Tee times for the third and final round of the fifth leg of the Hero WPGT at DLF Golf and Country Club, Gurugram:

More Read:- A high for Sunit Chowrasia that had uncle SSP in doubt