Home Indian Golf Jahanvi joins sister Hitaashee in winner’s circle as she wins 5th leg of...
Gurugram, March 12: Jahanvi Bakshi’s massive four-shot overnight lead gave her ample breathing space despite Vani Kapoor’s valiant attempt on the final day of the fifth leg of the Hero Women’s Pro Golf Tour at the DLF Golf & Country Club. Jahanvi carded even par 72 to cruise to a win as Vani shot 3-under 69, but fell well short and ended runner-up for the third time in the last three starts.

Jahanvi totalled 4-under 212 while Vani was even par 216. Tvesa Malik (69) finally found her rhythm and rose to Tied-3rd alongside Hitaashee Bakshi, who was 3-under for the front nine and 4-over for the back nine.

Amateur Avani Prashanth had another fine run as she finished sole fifth with her best card of the week at 1-under 71. 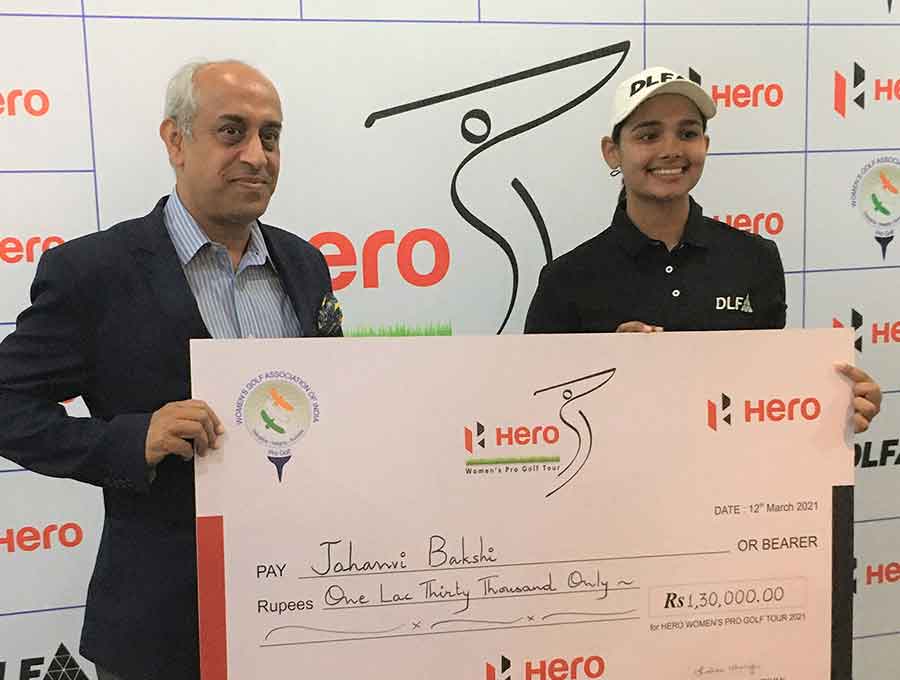 Jahanvi’s win means the two Bakshi sisters have now won once each on the Hero Women’s Pro Golf Tour. Hitaashee won last December and Jahanvi added to the family silverware on Friday. Very clearly, they love the sibling rivalry while rooting for each other at the same time. They played together with Vani in the final grouping.

The great work done by The DLF Golf Excellence Program supported by the DLF Foundation, was adequately reflected in today’s results, as the Bakshi sisters, Jahanvi and Hitaashee, both products of the Excellence Program, finished as winner and tied-third respectively. The Program scouts for talented young golfers and then puts them through their paces in a state-of-the-art Academy at the DLF Golf & Country Club.

In the final round, while Vani and Hitaashee had excellent front nine scores – Vani going out in 4-under 32 and Hitaashee in 3-under 33, Jahanvi, despite yielding some shots, kept her nerves on the tougher back nine and stayed ahead. While Jahanvi, Vani and Tvesa shot 1-over 37 on the back nine, Hitaashee went to 4-over 40 and fell back.

Jahanvi started the day in style with birdies on second and third, but dropped shots on fourth and seventh opened the door a little, though she birdied the ninth to be one-under 35. Vani Kapoor ran through the front nine with four birdies against no bogeys. At that stage Vani, starting seven behind Jahanvi, was just four behind. The gap narrowed to two as Jahanvi double bogeyed the 10th.

That was as close as Vani was able to get, as Jahanvi tightened her game, birdied the 11th and 17th and could even afford to bogey the Par-5 18th for a round of 72 and a well-deserved win.

Vani meanwhile dropped two crucial shots with bogeys on 12th and 13th and despite a birdie on 14th, she was unable to make up lost ground with four pars in the last four holes. “I am happy to be contending each week and have been second in last three events, so the form is coming back,” said the affable and experienced DLF golfer.

Tvesa Malik, who just could not find her rhythm, went on a birdie spree with five birdies between second and seventh holes. However, she had no more and she also dropped shots on 10th and 14th, but for which she may have finished runner-up.

Amateur Avani underlined her promise with a round that had six birdies, the most by any player on the final day, but she also had five bogeys to finish with 71 for a creditable fifth place.

Lakhmehar Pardesi (78) was sixth, Oviya Reddi (76) was seventh and amateur Hunar Mittal (76) was eighth. Another amateur Vidhatri Urs (78) and Amandeep Drall (80) ended in a tie for ninth.

Amandeep Drall despite her T-9 finish hung onto the lead on the Hero Order of Merit with Vani Kapoor on her heels as the gap narrowed to less than Rs. 90,000. Ridhima Dilawari, Pranavi Urs and Neha Tripathi follow in that. order.

More Read:- Treat Olympian like any other event, Divencha’s advice to his boys

Taiga Semikawa’s Panasonic Open win has him in elite league