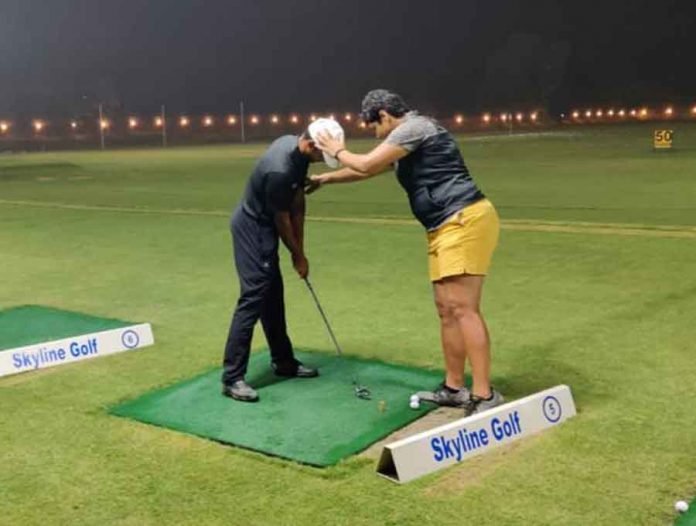 Seeing coaches in and around Delhi in patches or his showing on the golf course, @dhruvsheoran03 was far from settled. With a penchant for striking the ball far, focusing on the long game and merely “touching up” putting yielded little, quite like the trips to different coaches at various points.

Since turning pro in 2018 in dramatic fashion by winning back-to-back Feeder Tour events @pgtitour, Dhruv was on the lookout for order when a friend suggested he work with @priya.golfcoach. Based out of Gurgaon’s @skylinegolf_drivingrange, Priya Puri’s coming on board since October 2019 has had a steadying influence. Always there for the student, Dhruv can count the positives. “I needed someone I could put faith in,” The association has cleared the cobwebs in the mind. Course management, shaping the ball or playing to strengths like attacking the par 5s, Dhruv is acutely aware now. If earlier a round was about “go, play and come back” irrespective of the score, a round is now systematically broken down and analysed.

Meditation is a part of the regimen and so is inspirational literature. Despite expert advice, Dhruv had for long avoided picking up a book, but now reels off the titles and intrinsic messages. @robinsharma’s ‘Who Will Cry When You Die’ finds special mention. “Every chapter has a life lesson,” and has lent perspective to his existence. Off the golf course, it is the realisation that “there is lot more to life than golf”. On the course, staying patient and waiting to turn the corner is the way forward these days. The mantra seems to be working as Dhruv has posted some of his better results after restart. He finished 23rd at the Players Championship in Chandigarh and Gujarat Open, and now finds himself in a position of strength at #GladeOneMasters2021. If the weekend pans out as he would like it to, it will be cherished, else there is lots to look forward to as there is belief that his time will come.