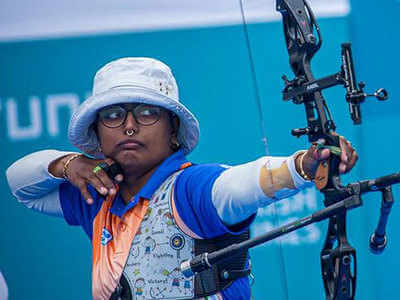 It was a day of some positive results for India at the Tokyo Olympics, which kept medal hopes alive.  In the women’s individual  archery event, Deepika Kumari beat Jennifer Mucino-Fernandez of the US and Bhutan’s Karma to move into the Round of 16. After losing the first set, she roared back to win the second set and eventually the match against her American opponent.

Though Indian rowers Arjun Lal Jat and Arvind Singh are out of contention for medals, they created Olympic history for India by finishing sixth in semi-final A of lightweight men’s double sculls  with a timing of 6:24.41.

Pooja Rani is also a win away from a medal as she stormed into the quarter-finals by defeating Algeria’s Ichrak Chaib with a unanimous decision in women’s 75kg (middleweight) category.

P.V. Sindhu came up with an expected result in badminton. She entered the women’s singles Round of 16 by defeating world No. 34 Cheung Ngan Yi of Hong Kong 21-9, 21-16 in her final Group J match. However,  B Sai Praneeth ended his campaign with a 21-14, 21-14 defeat to Mark Caljouw of the Netherlands in his second and final Group D match in men’s singles badminton.

In archery, Pravin Jadhav stunned world Number 2 Galsan Bazarzhapov in his first round but then lost to world Number 1 Brady Ellison. Tarundeep Rai lost to Israel’s Itay Shanny 5-6 in the round-of-32 of the men’s individual event. India’s women hockey team also had a disappointing day after losing 1-4 to Great Britain.

Indians to watch out for on 29th July