At the Mussanah Open Championship in Oman, Nethra Kumanan finished sixth, and was placed second overall in the medal round. With this performance she booked her place in the Tokyo Olympics in the Laser Radial category of the sailing event. Nethra is the first woman from India to do so and significantly, the first Indian sailor to have booked a place at the Olympics directly.

Nethra was introduced to sailing during a summer camp organised by the Tamil Nadu Sailing Association in 2009 at the age of 12. Although she was into tennis, basketball and cycling but eventually took up sailing. “I love it, it’s like no other sport, and I played everything as a kid,” says Nethra. “Sailing has been different and more mental than any other sport that I’ve tried.” (Source: Olympic Channel)

Nethra has been training in Spain for almost two years and has to shuttle between Chennai and Spain while managing her B.E. Mechanical Engineering lessons online. She won the national championships twice and has been a runner-up on two other occasions. Her first podium finish in an international event came at the India International Regatta held in Chennai in 2014.

Though Nethra was a part of 2014 Incheon Asian Games and 2018 Jakarta Asian Games, she came into the limelight after winning a bronze at the Hempel World Cup Series in Miami in 2020. She became the first Indian woman to win a World Cup medal in Sailing.

At the Tokyo Olympics, Nethra will be competing in the Laser Radial category. The category was first introduced as an Olympic discipline at Beijing in 2008. Nethra is presently training under Hungarian coach Tamas Eszes, a two-time Olympian.

The Laser Standard is the original rig, with the largest sail of all variations, and has been used at the Olympic Games since 1996. Indian Army’s Madras Engineer Group (MEG)’s Naib Subedar Saravanan had undergone training at Malta, Europe under the Sail Coach Academy for the past two years. 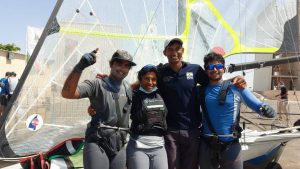 Vishnu enrolled into the Boys Sports Company, MEG and Centre in 2015 as a Boys Sports Cadet. He won medals in Junior National and Youth National Championships and participated in the Hong Kong Sailing Week – 2016 (ASAF Series – 2) where he won a silver medal. Based on these performances, Vishnu was appointed directly as a Naib Subedar into MEG 2017.

After enrolment in the Army, Vishnu won his first gold in Senior National Championship in  2018 and bronze medal in the Laser Youth U-21 World Sailing Championship 2019 held at Croatia.

KC Ganapathy and Varun Thakkar qualified for the Tokyo Olympics by finishing at the top in the 49er category at the Mussanah Open Sailing Championships. The pair of Ganapathy and Thakkar had won bronze in the 2018 Jakarta Asian Games.

In the 49er category, two sailors take on different roles. One generally steers the boat while the other undertakes the physical work and controls the sail. Both the crew are equipped with their trapeze, and sail.

There have been four instances of two Indian sailors qualifying for the Olympics but they took part in the same event. Farokh Tarapore and Dhruv Bhandari participated in the 470 Class at the Los Angeles Olympic in 1984. Tarapore and Kelly Rao represented India in the same event at the Seoul Olympic Games in 1988. Tarapore, in his third Olympics, paired with Cyrus Cama to take part in the same 470 class in Barcelona Games in 1992. Malav Shroff and Sumeet Patel participated in 2004 Athens Olympics in 49er Class.