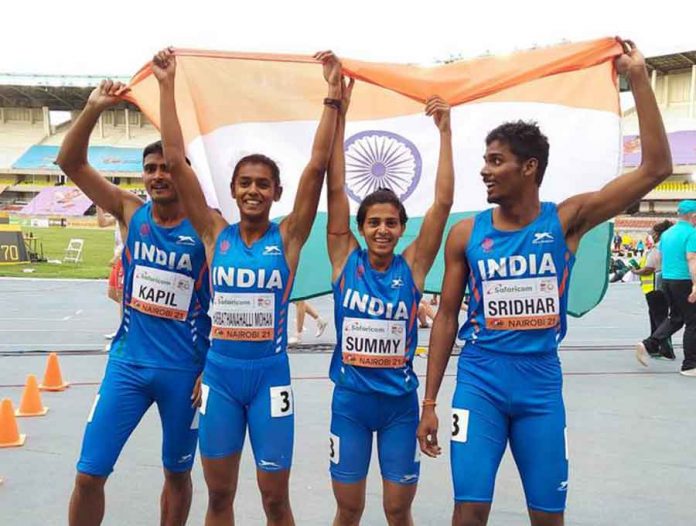 This was the fifth medal won by India ever in World Junior Championships.

Team India began the Athletics U20 World Championships in Nairobi, Kenya, with a bang with the 4x400m Mixed Relay team sealing a spot in the final with a timing of 3:23.36 seconds in the day’s first heat.

The team that included Abdul Razak Rasheed, Priya Mohan, Summy and Kapil won Heat 1 to qualify for the final. India made a change in the final squad and included Fed Cup Jr. Champion Barath S who clocked 47.55s recently in Sangrur.

Also Read:- Not one to fret but Kiradech seeks rightful spot on PGA Tour

The team held the new U20 World Championships record albeit briefly as the Nigerian U20 team bettered it in Heat 2 with a timing of 3:21.66s to top the qualifying charts.

The Gold of the event was won by Nigeria with Championships record 3:19.70s followed by Poland 3:19.80s who secured Silver.

Also making the cut was Priya Mohan, who qualified for the 400 women’s final after finishing third after clocking 53.79 in Heat 3. She qualified as the two best finishers alongside Ukraine’s Tetyana Kharashchuk.

The second Indian in the fray Summy fizzled out in Heat 2 and finished fifth with a timing of 55.43s.

In the shot put, Amandeep Singh Dhaliwal also qualified for the finals with a best throw of 17.92 metres on Wednesday. However, Vipin Kumar faltered in the hammer throw. His best attempt was 63.17M, which was way below the qualifying mark of 74M.

Javelin was in news again in Nairobi Indian’s Kunwer Ajai Raj Singh Rana and Jay Kumar both qualified for the final. Kunwer Ajai Raj threw the spear to 71.05m while Jay Kumar Jay Kumar hit 70.34m. Final will be held on 20 August 2021.

More Read:-Dravid not in race to replace Shastri as head coach