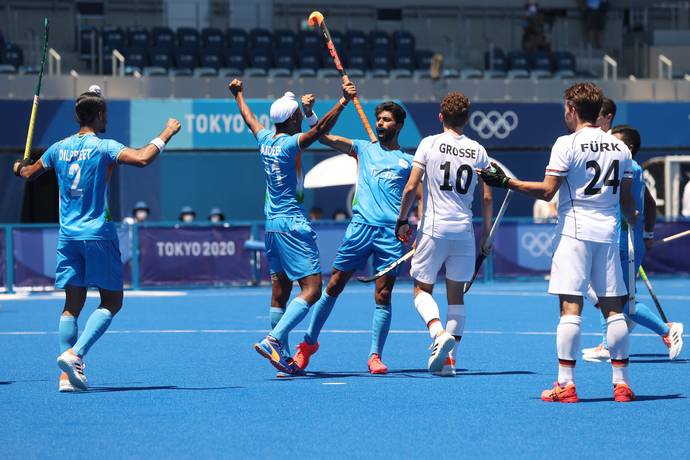 A billion prayers and cheers have not gone in vain. Yes! The Indian men’s hockey team has done us proud. They ended the medal drought after a long wait of 41 years. The team won  bronze by defeating Germany 5-4. Truly, it’s a day that “will be etched in the memory of every Indian”, as tweeted Prime Minister Narendra Modi.

Historic! A day that will be etched in the memory of every Indian.

Congratulations to our Men’s Hockey Team for bringing home the Bronze. With this feat, they have captured the imagination of the entire nation, especially our youth. India is proud of our Hockey team. 🏑

India were all pumped up after conceding two quick goals in the 2nd quarter but found a response to head into half-time at 3-3. Germany got a penalty corner with just 2 minutes to play but PR Sreejesh kept the shot away.

Readmore:- ICC to pitch for cricket at 2028 Los Angeles Olympics

Sreejesh was a wall. Germany took a bold call with 4 minutes to go by taking off their goalkeeper for an extra outfield player.

Simranjeet Singh gave them the much-needed equaliser. India looked a bit down in the first quarter but came out firing. After being down 3-1, India made a comeback with Hardik Singh scoring a goal in the second half making it 2-3.  The never-say-die attitude of the  men’s team has made India proud.

It will be a day that all fans will remember for years to come.