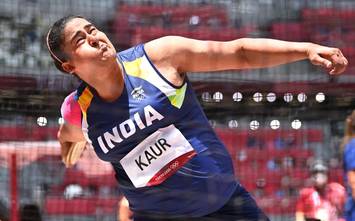 India had an extremely disappointing day at the Tokyo Olympics on Saturday with PV Sindhu losing in the semis in women’s singles badminton.

Sindhu lost to No. 2 seed Tai Tzu-Ying of the Chinese Taipei 21-18, 21-12. She will now play for bronze against China’s He Bing Jiao on Sunday, while Tai will clash with top seed Chen Yu Fei in the gold medal match.

India were also denied of a medal as boxer Pooja Rani was knocked out of by China’s Li Qian in the women’s 75kg quarter-finals by an unanimous decision. This was Pooja Rani’s third straight defeat to Li Qian, having previously lost at the 2014 Asian Games and 2020 Olympic qualification tournament.

A lot of hope was pinned on boxer Amit Panghal, but he too bowed out after a stunning 1-4 loss to Colombian Yuberjen Martinez, Rio 2016 silver medallist, in the men’s 52kg (flyweight).

However, Kamalpreet Kaur produced a top draw performance to seal her place in the final of women’s discus throw to keep some hopes of a medal alive. With an effort of 64metres she was second in the qualifying round. Valarie Allman topped the qualifying round with a throw of 66.42 metres.

Long jumper Murali Sreeshankar fell short of qualifying for the men’s long jump final. He managed a best of 7.69 metres in his first attempt in the qualification.

The women’s hockey team sealed a quarterfinal berth by defeating South Africa 4-3 in a must-win Pool A group match.

Indians in action on August 1

ReadMore:- A first for Italy, Marcel Jacobs the fastest man on Earth