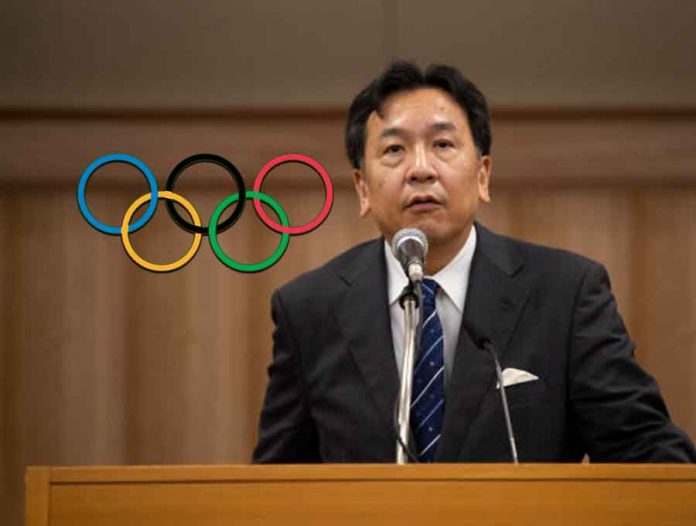 The Leader of Opposition in Japan has joined forces, who want the Tokyo 2020 Olympic Games to called off in wake of the Covid-19 pandemic.

The call to cancel the Tokyo Olympics in wake of the Covid-19 pandemic is growing bigger. This time Indian, British and South African athletes are in the centre of the demand to call off the Games.

There have been protests, online petitions and political opposition to call off the Games, which are slated to start in a mere 72 days from now.

The Leader of the Opposition in Japan has now joined voices opposed to host the Game, slated from July 23 to August 8 in Tokyo.

The Leader of the Opposition in Japan Yukio Edano has warned that the Games would be an “exhibition” of “highly contagious virus variants” and would increase the risk of spreading the virus in Japan. He also added that it would not be possible to protect the Japanese people from exposure to different strains of the virus since India, the UK and South Africa would be sending large contingents to the Games.

India is the worst affected by the Wuhan virus with more than four lakh Covid-19 positive cases being reported for the past few days.

Earlier, there has been a small protest outside the National Stadium in Tokyo on Sunday.

“Unfortunately, we have to say it is impossible to protect the lives, health and livelihoods of the Japanese people while holding the Olympics and Paralympics,” said Yukio Edano, Head of the Constitutional Democratic Party of Japan, in a parliamentary session on Monday.

“It would be unacceptable if going ahead with the games leads to insufficient measures that allow new variants of the coronavirus to be brought in from abroad,” Yukio Edano added.

Meanwhile, almost 60% of Japanese wanted the Games to be cancelled in an online survey on Sunday.

The survey, conducted from May 7-9 by the Yomiuri Shimbun daily, showed 59% wanted the Games cancelled as opposed to 39% who said they should be held. “Postponement” was not offered as an option.

Earlier, another Japanese politician Kenji Utsunomiya, who had unsuccessfully contested for the office of the Tokyo Mayor, had run an online petition seeking support to call off the Games. The petition, ran on change.org, had got nearly 2.5 lakh digital signatures in three days.