Home Sportinghub A first for Italy, Marcel Jacobs the fastest man on Earth 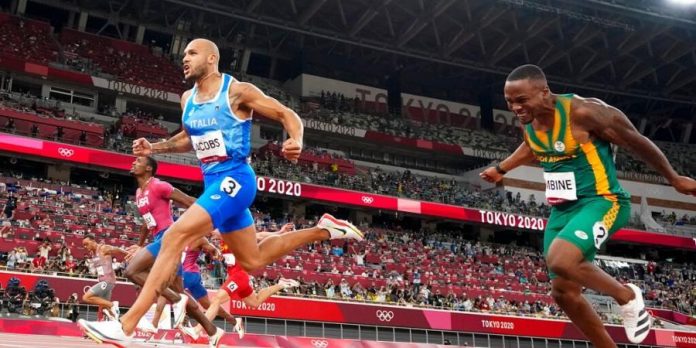 Marcell Jacobs of Italy put in a scintillating performance to achieve victory in the men’s 100m sprint final at the Tokyo Olympic Stadium. Stationed at Lane 3, Jacobs surprised everybody by crossing the finish line with a national record time of 9.80 seconds.

It was a quality field that Jacobs triumphed over, which included Fred Kerley of USA and Andre de Grasse of Canada. Kerley picked up silver with a time of 9.84 seconds while De Grasse got bronze in 9.89 secs. With this historic win, Jacobs became the new men’s 100m Olympic champion in the era that follows the retirement of Usain Bolt.

Bolt had held the podium’s top spot for more than a decade after winning the Olympics premier sprinting event in Beijing 2008, London 2012 and Rio 2016.

Also Read:- Olympic medal will make it a memorable birthday for Feng

Jacob’s win, with him having no prior experience of racing in major championship finals, came as a shock. He earned his place on the starting line of the final, which is incidentally his first-ever Olympic 100m final, after being one of the two ‘fastest losers’
in the semi-finals.

Proving his worth, Jacobs claimed gold to give Italy the nation’s first Olympic medal in men’s 100m sprint. He became the first European, after Linford Christie of Great Britain at Barcelona 1992, to win the Olympic 100m title. This is also Italy’s first medal in any sprint event after Pietro Mennea’s gold in men’s 200m at the 1980 Moscow Olympics.

“I didn’t look right, I didn’t look left. I just focused on running as fast as possible. I wasn’t the favourite. But my start was great, then I had this burst of speed. I thought I could run 9.79 – but I was happy with 9.8.”

Jacobs, born to an Italian mother and an African-American father, grew up in Desenzano del Garda after his father was transferred to South Korea. Initially he preferred sprinting but later became a promising long jumper. Three years back, Jacobs moved to Rome where he started preparing for the Olympics with a chiropractor, nutritionist and mental coach.

It is there that he realised that he could be a competitor in 100m at the Olympics. Jacobs, even reunited with his father, who lives in Texas, and that acted as a mental boost.

When Jacobs crossed the line, it was an impossible dream that came true and he savoured the moment with a roar and flexed muscles.

“I don’t know, it’s a dream, a dream, it is fantastic. Maybe tomorrow I can imagine what they are saying, but today it is incredible.”

ReadMore:- Day of misses for India at Tokyo 2020