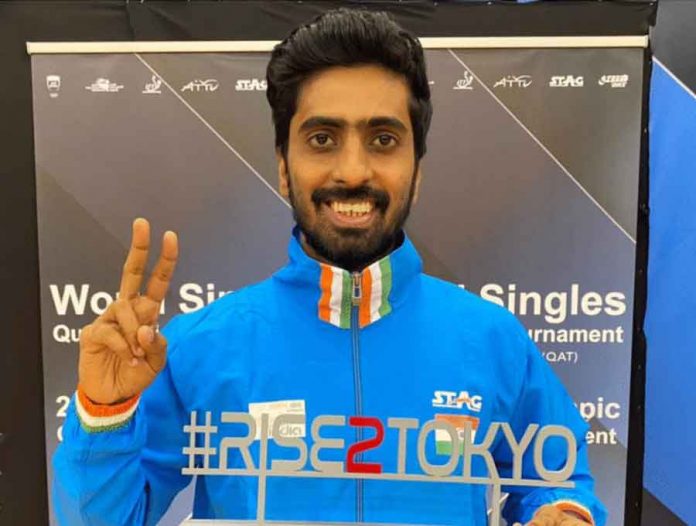 Sathiyan Gnanasekaran has joined the bandwagon for the 2020 Tokyo Olympic Games. India’s top ranked table tennis star qualified for the upcoming Games as the topper of the South Asia Group in the ITTF Asian Olympic Qualification tournament in Qatar.

“It’s a priceless moment and I am really speechless to express how I feel right now. It’s been a childhood dream of mine to take part in the Olympics and it is surely one of the best moments of my life! Now that I’ve qualified, I’m looking forward to putting in a strong performance at Tokyo and making my mark there,” said Sathiyan.

“Achieving qualification has been a hugely emotional moment for me, my family, my coach and everyone who’s been a part of my journey, after all the hard work I’ve put in and sacrifices I’ve made in my career,”

Sathiyan’s journey to Olympic qualification was never easy. Early on he faced the dilemma of choosing between sports and academics. He worked tirelessly at both. After having received his engineering degree, Sathiyan shifted his entire focus to table tennis. The perfect balancing between studies and sport at a professional level also makes him a true role model athlete and inspiration for young sporting enthusiasts.

A huge moment in Sathyan’s career was when he met his current coach, Raman Subramaniam, in 2012. The Guru galvanised him and showed incredible belief in his talent. The duo worked tirelessly over the years to realise their first dream of a ticket to the Olympics.

In 2015, Sathiyan was chosen for support under the Rahul Dravid Athlete Mentorship Programme (RDAMP). However, his association with GoSports Foundation goes much further back. GoSports had been providing Sathiyan with scholarships since 2012, when he was a junior player.

Since 2015, Sathiyan has been receiving holistic support from the RDAMP through the immense contributions of Aditya Birla Group, Aditya Birla Capital as Sony Pictures Network India.

“I don’t have words to express how much impact GoSports Foundation has had on my journey, right since my junior days when I was struggling to make a mark at the senior level,” said Sathiyan, expressing his gratitude.

“They played a massive role in turning me into a professional by bringing together all the experts like nutritionists, mental conditioning experts and more, under one roof, which has helped me step up my game. They were a one stop shop for all the holistic support I needed in my career. It’s just been a great journey with them, going through success and struggles together and , after missing out on a spot at Rio, I wanted to make it count for them and qualify for the Tokyo Olympics.”

In 2019, Sathiyan had a mentorship session with former Indian Cricket Captain Rahul Dravid, engaging with him and picking his brain to understand what it takes to become a sporting champion.

As the sporting world had come to a halt with the outburst of the novel Coronavirus pandemic last year, a special training robot was procured for Sathiyan to train during the lockdown. It helped him stay in shape whilst at home, with no one else to train with!

Sathiyan’s career trajectory has been on the upward trend over the years and his qualification for the Olympics is a reward for the sheer determination and hard work he has displayed.

Sathiyan’s coach Raman Subramaniam hinted about the plans for Sathiyan’s Olympic preparation. “We are already ready with the preparation plan, but Covid seems to be the only dampener in some ways. We have spoken about hiring quality sparring partners if the CoVID situation eases, while matches have been planned too,” said Subramaniam.

“He (Sathiyan) needs support up until the Olympic games with respect to having a physio, mental conditioning coach, and my presence at the games as well to round it off.”

The Chennai-born paddler will now look forward to the journey ahead in a steadfast manner, leaving no stone unturned for Tokyo as he aims to fulfil his dreams.

ReadMore:- CWG 2022 to feature 8 days of cricket; schedule to be released on Friday